Talents Behind the Wall “It was totally so heartwarming the moment they played the rocks as music instruments that my eyes began to well. But I felt somehow happy and wanted to play with them”.

On Sunday, 16 August 2020, Talents Behind the Wall was firstly launched and successfully conducted. Talents Behind the Wall, or TBTW in short, was an online concert aimed to bring quality entertainment to people in the comfort of their own house. Not only that, as an event initiated by an XL Future Leaders awardees, TBTW brought something extraordinary to the table: inviting young performers who mostly we’re not accustomed to seeing on TV; singers, magician, music instrumental players, dancers, even a traditional music group. More, TBTW committee offered free workshops for more than 500 selected participants. All the sponsorship fund would be made for providing internet quota for long distance learning for many elementary students in remote areas. Along with the XLFL spirit, the team taking responsibility for TBTW believed that knowledge would always be worth spreading, it could be made into fun learning, and given by anyone who was willing to contribute to change their community.

The event initiator, Daniel Heri Sandi Purba, an XL Future Leaders Awardee from Batch 8, first wanted to create a collaborative music video along with his friends in the same batch just to have fun and meet up with each other. Unfortunately, the idea was quickly challenged by Deedee, our XLFL Program Leader who was also his class facilitator. She suggested that rather than only creating a music video, why not making a live concert via video online streaming, so it will entertain better and inviting bigger number of people to access wnationwide. XLFL and the performers could also interact directly with the online audience too.
That was how it all began. Talents Behind the Wall started its journey making. Daniel led, and was supported by facil team, collaborated with some students from batch 8, batch 7, and some volunteers from outside XL Future Leaders.

The road to success was not easy. Countless proposals were turned down and revised and the fact that this event was purely for a good cause made it challenging to secure performers. Fortunately, the universe is on the TBTW team’s side. TBTW aimed to gather Rp 4.5 million sponsorship to be made into internet package for hundreds of elementary schoolers in need. Now, they have surpassed Rp 9.8 million and are still counting, all thanks to TBTW’s wonderful sponsors: XL Future Leaders, Sisternet.id, and Lima Untuk Indonesia.

As of 18 August 2020, Talents Behind the Wall’s concert in Sisternet’s Youtube channel has been streamed for more than 4000 times, exceeding the initial target of 2000 views. The event also gathered several good feedbacks from the participants. Erica Lesmana, one of TBTW viewers, mentioned that she was amazed on how TBTW arranged and presented an array of performance, from orchestra music to a magic show. TBTW even invited a piano duo, Aleks and Haruka, from Japan to perform in the event. One of TBTW performers, Bjo and his army of incredibly talented children from Ambon were featured in a local newspaper for their contribution in TBTW. Their performance in TBTW even inspired the local authorities to utilize the time and resources to create more creative outlets such as conducting a talent show for children in their area. 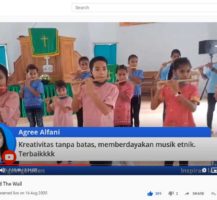 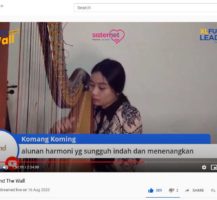 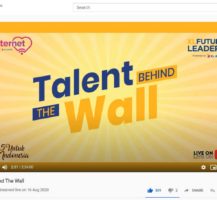 Furthermore, both Daniel as the project leader and Adrian as technical head agree that, while the concert was able to muster an incredible amount of views and gather number of sponsorships, the initial goal of creating TBTW to have fun together and do good was also achieved in an even grander manner. TBTW has set another benchmark on how creativity met collaborative effort, both inside XL Future Leaders and outside of it. TBTW has achieved the most precious milestone of all: the creation of a new family consisting of all the team members. Hopefully, this newly found family can have a relationship that creates a supportive environment to create more changes in the community for betterment.

As a project leader, Daniel expressed his highest gratitude and respect for each volunteer who was shoulder-to-shoulder to make this all possible. They were the real heroes of TBTW; Vio, Kevin, Icha, Nadya, Ayaka, Emma, Dea, Luthfi, Ewen, Adil, Ong, Shella, Maria, Tivanny, Furqan, Adrian, Fran, Nah, and Yuni. “You guys definitely hold a special place in my heart!” he said.